The concept of the Crown originates from a cap, turban, or more formal metallic crown that was decorated with jewels. Its placement on one's head indicated that one was set apart for a particular task or calling. Such crowns were used for the high priest; or for kings of Israel. The crown indicated the consecrated role of its wearer.

Besides the concept of consecration and exaltation, the second term for the crown in the Old Testament indicated the presence of honor.

In other cases, the crown indicated the presence of honor as a cause for glory and joy. These are more metaphorical uses. So a good wife is a crown to her husband or a good harvest. God is also a crown in this sense. To experience the blessing of his character and activity on one's behalf is said to be a crown. So his loving-kindness and mercy can be a crown, as can mere relationship with him.

A Scepter or  baton borne by a sovereign as an emblem of authority, royalty or imperial authority. It is significant of a royal Scepter from the thrown room of God as the King of Kings and Lord of Lords.  Each Woman of Destiny will complete this program and rise out of the ashes to be crowned, consecrated and honored as a Queen for the King of Kings and Lord of Lords. The scepter has been extended to her; giving  her access to the thrown and has found favor with the King. She will receive her crown and now be able to walk in her authority, confidence and power to be used to build up the Kingdom of God on Earth as he ordained it in Heaven!

Esther: 5:2 “When he saw Queen Esther standing in the court, he was pleased with her and held out to her the gold scepter that was in his hand. So Esther approached and touched the tip of the scepter.”

Esther 8: 4 “The king extended the golden scepter to Esther. So Esther arose and stood before the king.”

Esther 4:11 “When he saw Queen Esther standing in the court, he was pleased with her and held out to her the gold scepter that was in his hand. So Esther approached and touched the tip of the scepter.”

The Phoenix bird is a representative and synonymous with Christian ideals and symbolizes the death of Christ and his resurrection from the dead, which is celebrated each year at Easter.

The well-known inspirational phrase "Rises like a Phoenix from the Ashes" is often used to describe someone who has suffered hardship or trouble and begins to rebuild their life to be better than before. Christ suffered, and died but arose three days later, which is both a symbol of faith and success. Thus, the idea of being reborn into a new life in Christ, full of grace and authority is fully encompassed in the life cycle of the Phoenix…it grows old, dies and becomes reborn out of its own ashes.

After completion of this program, we anticipate that each Mentee will indeed rise triumphantly in all of God’s splendor…out of the ashes of the past, disappointments, hurts, failures, hardships, and insecurities rise transformed and refined from the inside out in God’s Beauty, Grace, and Power as “Women of Destiny.” 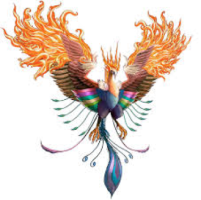